Forgiveness doesn’t cure but helps a lousy swing. It makes an off-center strike straighter, a slice a little less severe, and the trajectory of the ball, much higher. In short, most forgiving irons make your bad strikes look less bad.

More and more companies are designing irons that are easier and more fun to play. If you feel that the club is holding you back from getting shots, maybe it’s time to get a new one.

But more is involved in club replacements apart from usability. Forgiveness is an indicator of good iron, especially if you are on the higher side of the handicap index.

Finding the exact iron that suits your game may be challenging, given that many other factors need to be considered; e.g., budget. If you look at the evolution of the game, it may seem that all signs of progress have been made mostly in drivers.

While it’s true that drivers have come a long way in golf, it’s also true that the past 30 years have witnessed an exponential improvement in the way irons are designed and manufactured.

In our review, we bring out the best five irons that fit the upgrade you are looking for!

Our first iron is not different from the rest, but unique!

As it is said, a lot of time needs to be invested in making something great. Over the years, Callaway has earned the reputation for being a brand in terms of manufacturing, design, and technological advancements.

No wonder, the Rogue X, launched in February 2018, is a product of their revolutionary capabilities.

Why Callaway Rogue X became One of the Most Forgiving Irons?

This is the primary catalyst for the forgiveness of Rogue X. The technology ensures that you get more hitting area on the surface, thus reducing ball diversions on off-center strikes.

For a mid-to-high handicapper, the extra yardage means more distance even at a slower swing speed.

With the VFT technology, a specific area of the face is made thicker than its surrounding perimeter area. The VFT helps in increasing the inward flex upon impact on off-center strikes, which translates to more ball distance.

With this technology, even if you hit the ball 1″ off the center, you will land close to the distance of a perfect shot.

Do you struggle to get your golf ball in the air? The Cleveland Golf Launcher HB Iron Set has proved to be the best alternative to game improvement irons, especially to those who have slow to medium swing shots.

Why Cleveland Golf Launcher HB became One of the Most Forgiving Irons?

Hybrid hollow construction helps in creating a deeper and lower center of gravity that helps to lift the ball high up in the air.

This is made possible as the sole is now wide, with a high-strength steel insert and a sloping recessed crown. New golfers get faster ball speeds and higher flight.

The steel face helps you get better control over your shots. It adds elevation to your shot and ensures a steep landing near the target.

The HiBore crown has been designed to move the center of the gravity deep and low that improves shots and increases forgiveness. The inserts allow the face to flex more on impact and increase ball speed no matter where the impact.

As the name suggests, the new line of Cobra named F-Max Superlite, launched in September 2018, proved to be a game-changer for players who are well-suited for light and easy-to-hit clubs. It built on the success of the original F-MAX launched in 2017.

Why Cobra F-Max Superlite became One of the Most Forgiving Irons?

The iron has been re-engineered with a clubhead that is four gms lighter than its predecessor. Forgiveness is optimized by maintaining the same level of MOI.

Adding to its cutting-edge technologies is the lighter and softer brand of Midsize LAMKIN REL 360 grip, which helps high-handicappers deliver good shots on lighter swings and gives greater comfort to the hands for longer shots.

The CG in the hosel has been strategically positioned to give the desired launch and trajectory at the address. The low profile design with cavity design helps in launching the ball higher in the air with a straighter trajectory and maximum accuracy. 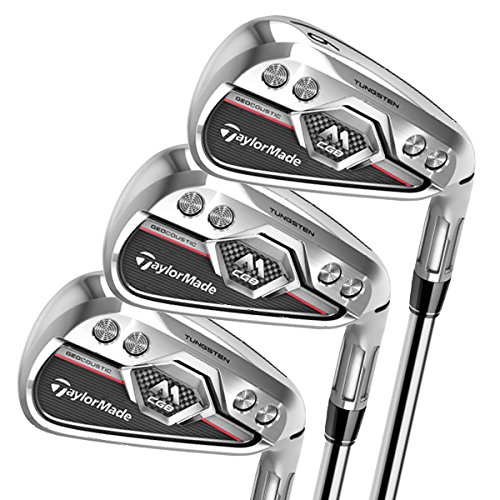 The sign of a good golfer is an acknowledgment of the fact that he needs help to improve his game. Getting the ball in the air and making better contact during shots are categories where a golfer needs to improve continuously.

That’s where max game improvement irons, like the TaylorMade M CGB irons, launched in May 2019 come into play. As a brand that has the highest amount of COR irons in the market, the newest set of irons ensure that the humblest of the players get the best.

Why TaylorMade M CGB Iron became One of the Most Forgiving Irons?

This advanced technology increases flex all across the clubface to increase ball speed and flight. The speed pocket reduces spin and increases distance even when you hit the ball below the clubface center.

The iron is fitted with an advanced Hybrar damper that dampens vibrations through its precision-shaped headwork and improved the sound and feels after every shot.

The inverted cone technology helps in building a larger sweet spot to reduce mishits and increase ball speed throughout the clubface.

Even if the ball is hit thin, they jump well and achieve the same desired distance, while toe and heel mishits straighten out in the air after the shot.

Launched in January 2019, the Wilson Staff D7 was the perfect improvement on the D300. It bridged the gap between the Game Improvement Iron and the Emerging Players Distance irons by proving great distance with more forgiveness.

While it is an improvement on its predecessor, it certainly provides a sleek and clean look that inspires confidence at the address for the mid and high handicappers.

Why Wilson Staff D7 Iron became One of the Most Forgiving Irons?

The new design of the head encompassing the low back-weights increases the loft dynamic and gets the ball airborne pretty easily.

Mid and high-handicappers who prefer lower swing speeds will benefit from the design and the functionalities it offers in terms of spin rate and higher trajectory.

In the Wilson D7, there are three rows of power holes present in the sole of the irons. By this design, the engineers were able to manufacture a thinner face that increases the speed of the ball. The sole is now wide, thus preventing the occurrence of divots.

The cavity is made up of carbon fiber, a material prominently used by Wilson for most of its clubs. This reduces vibrations and gives good feedback on the address.

Also, Wilson has shed its traditional red color and has given an accent of blue within the cavity, which also looks sleek and clean.

In golf, reducing the number of bad swings doesn’t come simply by practice. You need clubs that have the elements necessary to help you do that.

That’s where manufacturers chip in by devising technology to tweak their equipment to let you achieve your scores. Our reviews provide a fundamental analysis of how some of the great brands perform in the market.

So if you are looking for an iron that lets you score well, then do try one of the listed five from our review. Let us know in the comments section how that has turned out for you!