Sweet Spot. That’s the magic word in the golf world and on the golf course. As the adage goes, these spots not only let you enjoy the game but also expand them.

A number of high and mid-handicappers always struggle to find that ‘sweet spot’ to play a clean strike. Imitating professional golfers who seem to hit their balls hard does no good for average golfers using long irons. The secret is to ‘swing’ the ball and not ‘sweep’ it. Well, that’s easier said than done!

It’s like the clubs are telling the golfer – Hit me if you can!

To solve this dilemma and ‘rescue’ these golfers, a new and innovative club was designed that changed the way people thought about the game. Being the gentleman’s game, the new Hybrid club proved to be the rescuer or the middle-man who made the game easier and let men become the gentlemen of the game. 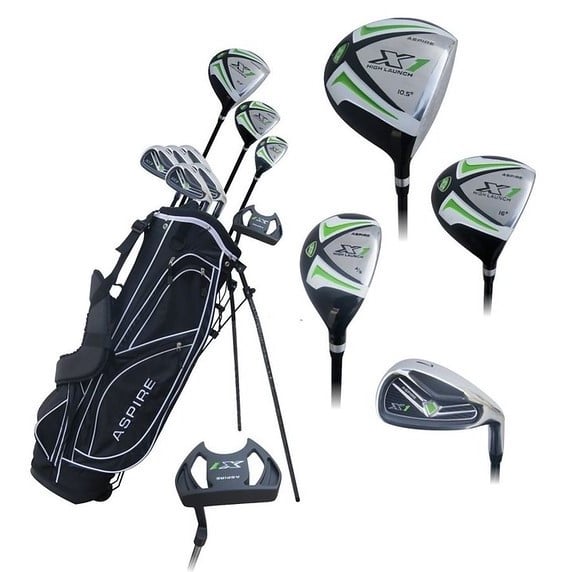 Hybrid clubs are also termed ‘utility clubs’ and ‘rescue clubs’ due to their versatility. In simple words, a Hybrid club is a mixture of iron and wood and combines both of their characteristics. These clubs are designed as a replacement for the longer irons which are difficult to play with on the fairway and on the rough.

Many Golfers call the hybrid a bigger-headed iron and a smaller-headed wood, and versatile enough to be used in multiple ways on the golf course.

As a little bit of history, Cobra Baffler XL is credited to be the first hybrid club launched in the market in 1998 by Cobra. The early 2000s saw a surge in the use of hybrids. According to a survey conducted by the Darrell Survey Company, in 2004, one in 12 golfers carried a Hybrid, club, whereas today, one in two golfers carry them.

Nowadays, a golfer who doesn’t know about a hybrid club is like a leaf that doesn’t know that it is a part of a tree.

So how do you hit using a hybrid club? 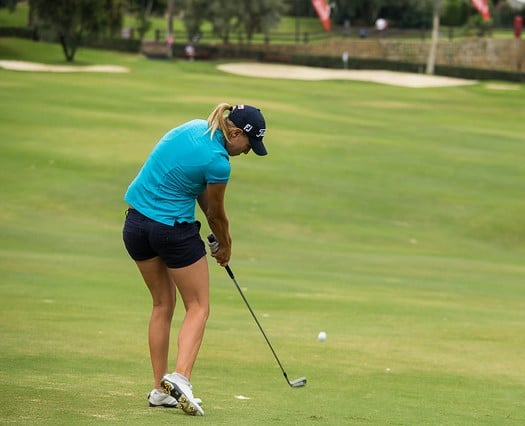 Before understanding the proper way to hit a Hybrid, it is important to know how these clubs are designed and with what motive. Why are these hybrids easier to hit?

In the Hybrid, a lot of weight is put in the lower portion of the club and a bit of weight in the back. This moves the gravity to the back which helps the ball to go higher on impact. This design helps golfers to trust the technology than their wrists and swings. However, using technology requires practice. But with practice comes good shots.

The main question that comes is – Since the Hybrid is a cross between a wood and an iron, do we hit it like iron or like a wood? Before we understand that, let’s understand the proper method of hitting the hybrid? Let’s consider some basics:

Grip
Even though a Hybrid is the love-child of wood and iron, it is better to treat it as a long iron in terms of holding it for a shot. A golfer needs to avoid holding it too tight so that it does not pressure the arm. Since the policy is – first the ball, then the ground, it is necessary to press the hands gently forward and lean on our left side for the best posture.

Now, how do we position the ball?

Position of the Golf Ball 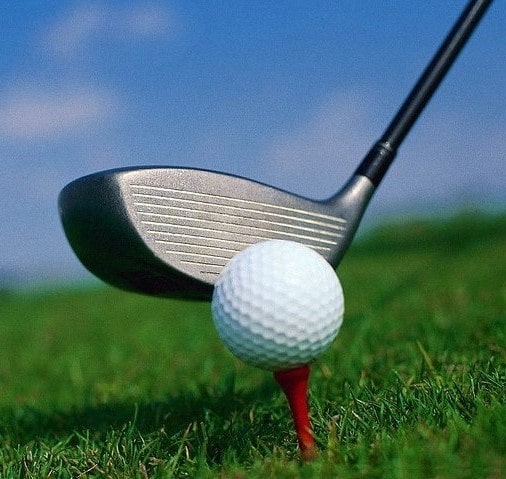 Since golfers tend to hit the ball on the upswing, the position of the ball needs to be correct in order to provide consistent contact and a good flight. For those who struggle to get the correct ball position can do well to create a T structure on their greens to get the right angle.

As to the golfer’s posture, he needs to get a wider stance for this hybrid and the ball should be positioned a bit further up the stance and the golfer’s sternum should be behind the ball. When the ball is little in front of the center, the golfer can easily give a descending shot.

So once the ball is positioned, how do we hit the hybrid? 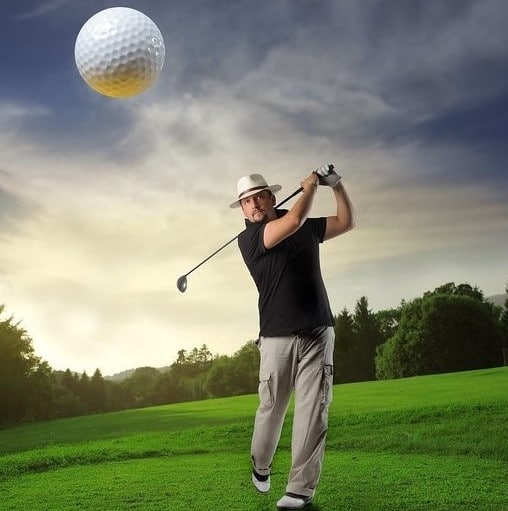 The best way to hit the ball is to descend and hit it through rather than sweeping it up in the air like wood. It’s like swinging an iron on the fairway.

Many golfers make a mistake in the way they position their sternum. In the pressure to hit the ball high, they swing their entire shoulder in an upward angle that puts the chest facing the sky. However, since the golfer needs to descend on the ball, he needs to swing his arms in a way that makes his chest simply face his front foot. Let the club do the wonders, not your body.

To practice hitting the hybrid place a quarter coin in front of your ball and then visualize that you are hitting the ball first and then the quarter. Nice way to get the hits correct!

Now, do we hit the ball off the tee or off the rough using the hybrid?

There is no one righteous answer to it. Each Golfer has his own style and hence we do well consider all the different ways to hit that Hybrid in your bag.

Hitting off the Tee Peg 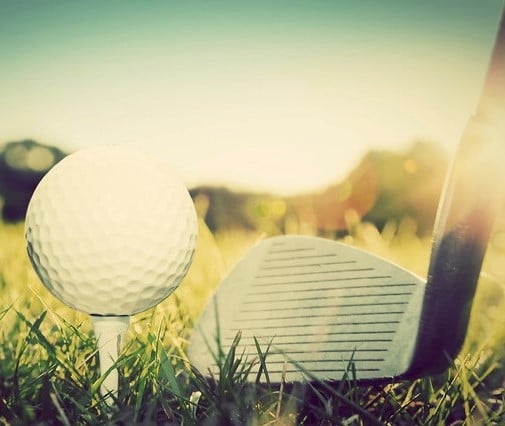 What is the best posture for hitting off the tee?

The middle portion of the body, or sternum, and the hands should be slightly forward to the address. This posture ensures that you come down steeper on the ball with less loft. Since a hybrid is designed with a deep Center of Gravity, a golfer doesn’t need to lift the ball with his hit. Just hit it and the club will do the rest.

Does it matter if you’re an average golfer? Not much. It is all a matter of how skillfully we are able to swing the club. A professional, low-handicap player can hit down with good swing speed, even making a divot, and still get good results. An average or high-handicap player, who struggles with getting a swing, can use a flat angle of attack and get the ball off into the air. This, however, does require good practice.

Now let’s consider the most difficult part – using a hybrid when your ball is sitting on the rough.

Hitting a Hybrid off the Rough 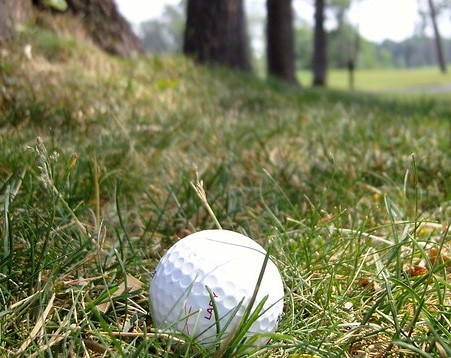 Professional golfers agree that if we want to hit the ball off the rough, the swing needs to be perfectly V-shaped and not a circle nor a U-shaped swing. The trouble with a circle or a U-shaped swing is, it eliminates the contact between the club and the excess grass behind the ball. We may call it an upright backswing, which comes down on the ball.

When the ball hits the rough, it takes great effort to get that contact and hit that normal shot. As said earlier, rather than concentrating on our posture, it is important to let the hybrid do its job.

Firstly, the clubface needs to be opened at the address. Once an appropriate position is gained, move the ball slightly to the stance with more weight on the left side of our body. Say, maybe 60% to the front leg. Once the weights are apportioned, we may need to go down one or two inches on the grip and get closer to the ball. This position will help us find the steeper angle to hit the ball without contacting too much grass on the way.

What if the ball is close to the green? Try the putting stroke with the rescue club. Rather than hit it, putt the ball and there it rolls off a few inches off the ground or the rough to the hole. 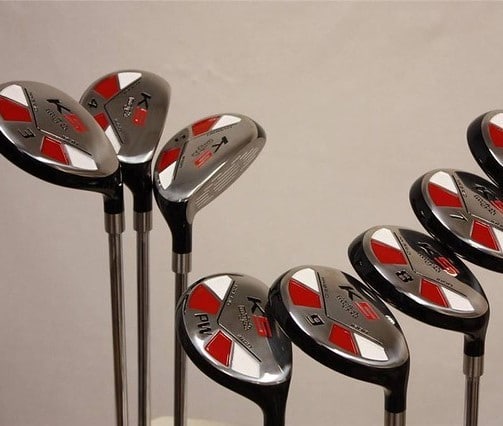 The Hybrid club is undoubtedly the secret weapon each golfer needs to possess. The mantra for a successful shot is ‘Pound the Ground’, i.e. don’t’ try to sweep like painting a brushstroke, but come down like you are going to hit the ground.

Technology has advanced to the point that by using the hybrids, golfers can concentrate on their shots without having to pressurize their arms and wrist to lift the ball. While Hybrids certainly help the average golfer, nowadays, they have become common in the PGA, Champions, and the LPGA Tours.

In 2011, Mark Wilson used his 17 degrees Ping i15 and a 20 degree Ping i15 Hybrid clubs to win the Sony Open. Helen Alfredsson, a woman golf pro, uses a hybrid Adams Idea Pro 18 on the LPGA Tour. More and more professionals are using a combination of drivers, clubs, and irons in their bags to hit their prized winning shots.

With the hybrid, gone are the days when players pushed themselves to the limit. Today, not hard work, but confidence and technology are the king of the game.