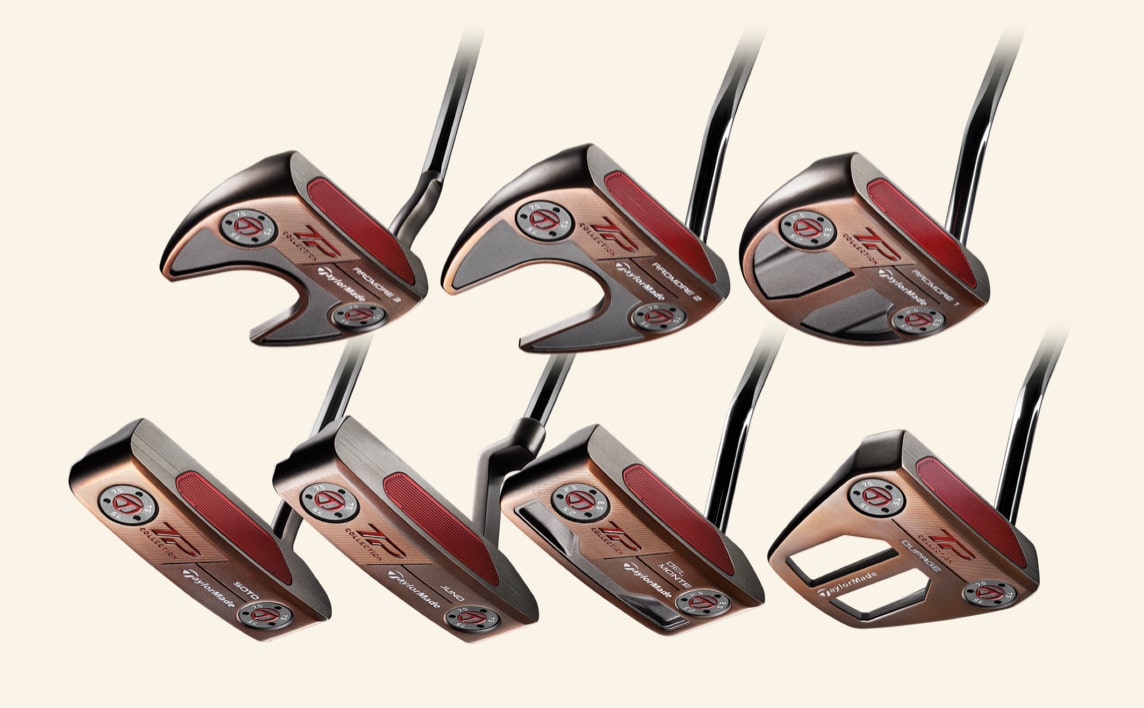 If you’re looking for a showdown of the TP Taylormade 2 and 3, then you’re on the right page. A lot of time has passed since Taylormade came out with the Patina series and the two are the latest of the three models.

Of course, there are later models like the DuPage with four-mallet putters and the Soto, Juno, and Del Monte. However, this article will look at the first of the 7 designs starting from the first version.

The Ardmore 2 and 3 are of higher quality than Ardmore 1. They come with better designs and more benefits. Although they have their differences, versions 2 and 3 of the Ardmore have something in common.

To make it easy to select between the two, we’re going to look at the two and compare them. Is one better than the other and why?

But before we go into the review, let’s look at something very important:

Choosing Your Putter: Things to Consider

There are hundreds, maybe thousands, of putters out there to choose from. Fortunately, there are actually a few that are popular and well made for players of different levels.

The Taylormade putters in this article are one of these. But before trying to decide which one might be suitable for you, there are a few points you need to consider.

When you’re looking for a putter for your game, you’re going to find them in different shapes and designs. Depending on your preferences, the chances of finding the one you like is high.

In addition, you need to consider some of the features of the putters you’re selecting especially when you already like the design or shape.

This is the angle between the shaft and the sole of the club. For the best performance, you need to choose the one where both heel and toe sit evenly at impact.

When you choose a putter with the proper lie, not only will you be able to stand at a comfortable angle but your eyes will stay in line.

You’ll have far lesser control and even bad contact when the lie angle on your putter is poor. So, it’s important to pay attention to this.

Another important feature to consider is the loft as it’ll determine the quality of your spin and launch. According to a test by a few pros, having a putter with the convention 4-degree loft produces backspin and may launch putts too high.

The green you’re playing should also be considered since with less loft, you’ll get a better launch on faster green compared to a slower one.

The next important feature to consider on your putter is the weight. The head weight, grip, and counterweight should be considered here.

You’ll find that while some putters have heavy head weight, others will be light on the head. Therefore, you should know the one that can get you the best response. If you’re playing on slow greens, you might get a better result with the heavyweight.

The otherwise is also true. The grip weight is another factor that affects the feel and ergonomics of the putter.

When you have a balanced weight on the grip, wielding the tool will be a lot easier. Lastly is the counterweight, which is a process of putting more weight towards the top of the putter.

Some standard device comes with this technology even though not all players will want something like this.

Unlike the Ardmore 3, the head shape of the Ardmore 2 has a conventional long fang design in addition to the classic look. So, if you want a longer fang or wing, you may want to go with the Ardmore 2.

Moreover, Ardmore 3 has a different shaft and is more suitable for players with a heavy arc putting stroke. Looking at the aesthetics of both models, the Ardmore 3 is fancier, sharp, and with a different look than the Ardmore 2.

The Ardmore 3 is also made in copper but comes in varieties while the Ardmore 2 is a steel-based putter. While they’re both strong, I feel that steel is stronger and feels heavier during handling. 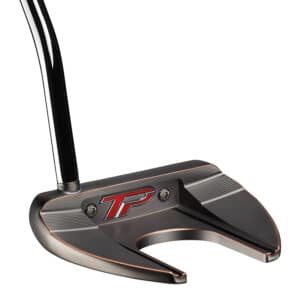 The Taylormade Ardmore 3 is intended to be an improvement over the previous version. It comes with copper in place of the steel in the Ardmore 2, which according to the manufacturer should give you more stability and better aesthetics.

Of course, we are going to break down the features and see if they can live up to the hype.

The Ardmore 3 like its siblings comes in a modern-shaped mallet design and offers a 42-degree toe hang on the L-Neck hosel. If you have arcing putter stroke, this is your club.

Taylormade has tried to make more improvement in this putter with the addition of the newer super stroke pistol grip for a solid grab and firmer control.

This is one of the negatives that some players point out while out with the putter.

With this putter, you can manage your lag putts better since it has a more responsive face. When you hit the ball, they come out with full force, reducing the friction that can make it difficult to judge lags.

The club also comes with an alignment aid, so you can say goodbye to difficulty in lining up. Ultimately, this is for someone who wants better lag puts and has a heavy arc in their stroke.

Fortunately, it’s priced similarly to the Ardmore 2 so you aren’t spending too much if you’re looking to buy get this.

Like the previous one, it comes with the new pure role 5mm insert, signature tp screws that screw in the insert, the luxurious patina finish, and the adjustable weight system. 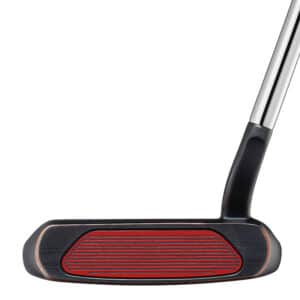 Like the previous model, the headcover of the TP Ardmore 3 is a velcro, which is more flimsy than the popular magnetic closure.

Another thing you should note is the weight of the head on the putter. It’s at 350 grams, which is a little on the lighter side. Though it should be seamless to behold, it can feel feathery while you’re holding it.

However, you can purchase more weight from Taylormade and add more to it using the extra ports. So, that gives you room for adjustments until you’re able to customize it to suit you.

So that when you own this, the owners of the third in the collection don’t have a lot of advantages over you in terms of features or benefits.

Although you might see the pros wielding the Taylormade products, don’t be deceived.

If you’re working arduously to reduce your handicap and are looking for a club to help you pin it down, then you should check out the Ardmore 2.

It’s a good club and suitable for casual or amateur golfers looking to improve their game.

The downside to this putter is not the lack of features. Rather it’s the price. It costs more than a lot of similar clubs in its league. So, if you’re not ready to spend a lot on clubs yet, you’re excused to go for a cheaper one.

This makes it a lot easier for all players at different levels to take advantage of the putter. 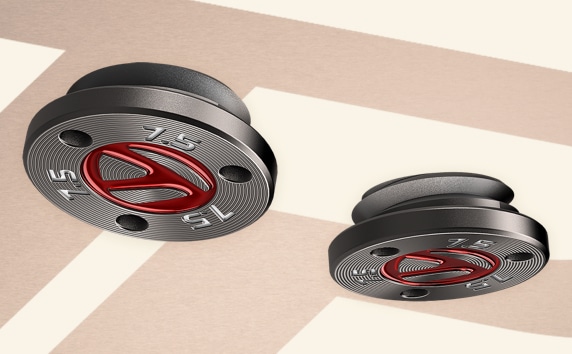 The Ardmore 2 also comes with a new insert that’s secured in place by two screws.

This helps to reduce air pockets below it while minimizing voids and helping ball striking. This gives you a firm hold and rock-hard feel so you can get perfect swings.

Aside from the premium feel, it also comes with a clean and unique look.

The Ardmore 2 is part of the Patina Collection that offers mallets for forgiveness and blades for spectacular control.

Not only is this well constructed but it’s beautiful too. If you pay attention to the aesthetic of your clubs, then you’ll like the design of the TP Patina Ardmore 2.

The front end is a 5mm aluminum insert, which not only gives you a solid feel but also excellent sound. The insert is also useful for absorbing impact without dampening your swing.

The insert in the putter gets a 45-degree groove and a pulpy polymer. This means better traction on diverse surfaces. You’re going to be hitting each ball knowing that they’ll stay in their intended line of course.

As you can see, both models are from Taylormade. They both spot a modern look and suitable for golfers at different levels. No matter the similarities though, you’d surely have to settle on one.

If you have not used Taylormade before, you can go for the Ardmore 3 since it’s the latest. Fortunately, the price difference isn’t much at all. And if you’re a Taylormade Patina Ardmore 2 fan, then go for the 3. It’s worth the upgrade.