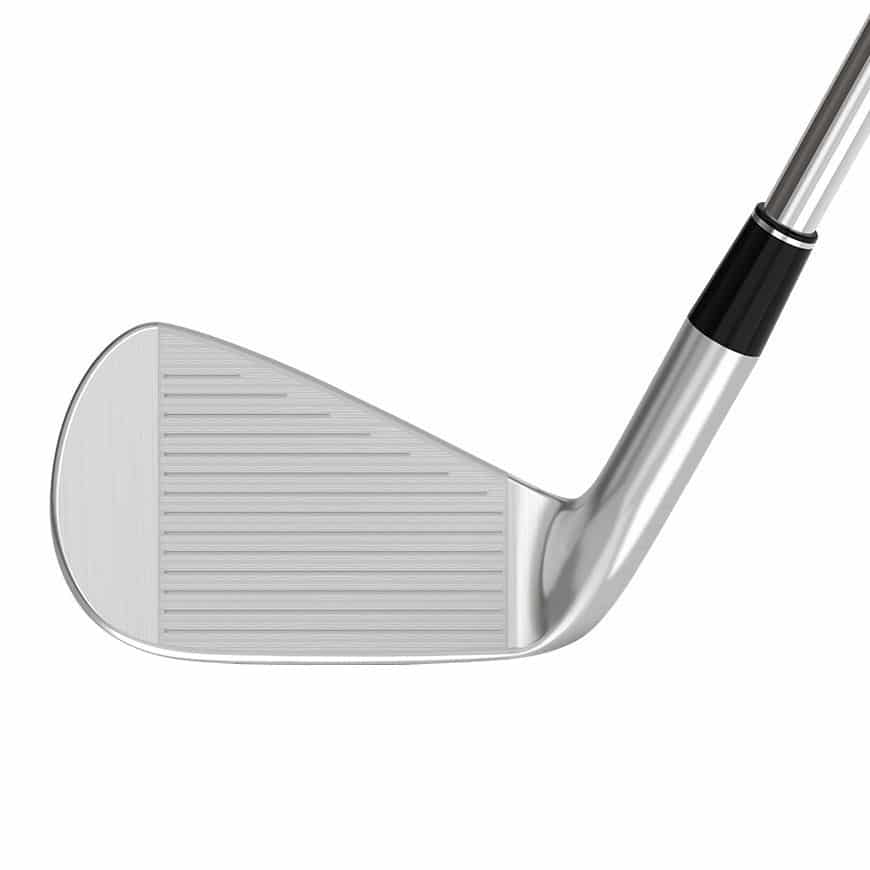 Both the Srixon Z565 and Z585 irons are in the same series, both following after the Z545.

They are very similar in a lot of ways but there are subtle changes that Srixon has introduced in the Z585. Whether these changes are worth the investment or upgrade depends on what you want in your next club.

A lot of these can also depend on your previous experience and your level (low, mid, or high handicap). In this article, I’ll come up with a review of both products separately and then compare them.

This way, you can see what improvements Z585 brings forth and if you need to upgrade (if you already have the Z565) or which to choose if you’ve never used any of them.

Let’s get into the review:

In terms of differences, there isn’t a lot between the two models. The Z565 was successful as it was widely popular for its forgiveness. That’s why in the Z585, Srixon didn’t introduce too much change.

Instead, a few things like the speed of the face and the feel was added to the 585. In looks, the Z585 has a narrower profile than the 565.

To improve the MOI and spread the weight across the head, Srixon moved the muscle lower towards the toe.

Thus making seemingly less rounded in the Z585 than Z565. Srixon isn’t concerned about even the spread of weight on the head but also the strength. The brand added more mass behind the center of the face.

This will translate into more power in the Z585 than the Z585. The speed grove on the face insert has been thinned out in the 585 so that it can flex more than 565.

Read More: Ping vs Callaway Irons: Which is Better? 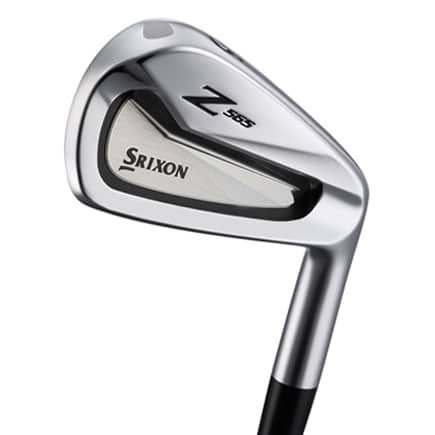 The famous Srixon Z 565 Irons belong to the Z 65 series and are the best of this series since they have a deeper back and larger top line.

Its major difference with the other models of the Z 65 series is the face.

It is in this model, the Z 565 where Srixon implemented a high strength SUP10 steel insert to increase the ball speed.

The Forgivenes is spot on

Besides, the forgiveness of the Z 565 is impressive and much greater than other similar models.

The perimeter is thicker in the 565, better than others in the series, and that’s where the forgiveness comes.

Thanks to more weight around the edge of the head, which will allow you to decrease lofts and maintain the same height in each of the irons.

The Z 565 offers a great feel on all types of shots, even the longest ones.

Therefore, these irons are perfect for experienced players, like mid-handicappers.

Although they may seem a bit expensive for many players, the reality is that in the long run, these irons are an excellent choice.

Because they are durable and made with high-quality materials, which guarantees that you will have wonderful irons in top condition for a long time.

There are wider grooves on the club, which helps with ball spin and control. Distance is not the focus here, so if that’s your goal, this isn’t the club for you.

However, if you’re looking for more consistency and accuracy, this can help you improve in that area.

There is a high-strength SUP10 steel face insert, which is designed to increase ball speed.

Aside from the pleasing look of this Srixon, it has a longer than average distance with a mid-to-high trajectory. The light head makes it easy to motor through hitting zone and the minimalistic feel lets the hands swing it with lesser effort.

One thing to note about the Z 565 is that in the hands of a beginner golfer, it may perform poorly. But when it’s handled by a pro, it shines. So, if you’re yet to develop your raw power and still working on your shots, you may want to look at another iron.

However, it’s not lacking in the forgiveness department – it can give you that control and peek feeling when playing. And when you get fitted, you can expect a good return on your investment. 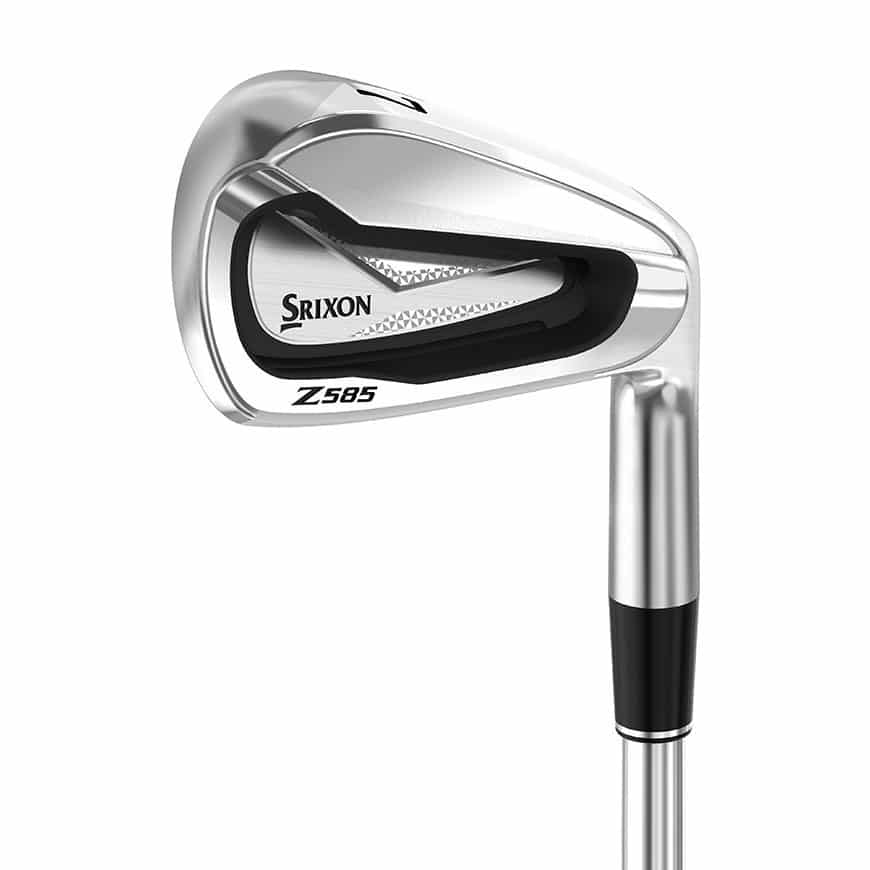 The Srixon Z 585 Irons are the advanced and improved model of the Z 565 irons.

And Srixon has kept the same forged construction along with the forgiveness that made the Z 65 series so famous and popular. Also, they have improved the feel and the speed of the face.

The Z 585 has a steering profile very similar to the Z 565 but with a larger topline and better offset.

Regarding the backhand, the rear of the Z 585 is surprising as the main part is lower and more towards the tip. This allows for better weight balance and improved MOI.

Srixon has done a fantastic job with these irons.

And the most outstanding feature of the Z 585 is inside the cavity as they have developed a thinner head and decreased the size of the Speed Groove, and this makes them more flexible.

Besides, they are very strong and durable because they are made of forged 1020 carbon steel.

And the weight is better distributed than the previous model, which improved the feel.

The sole still has the classic v-shaped design, which allows for better movement through the grass and makes the polished chrome edge look fantastic.

There is now an added speed groove on the z585, which provides more face-flex, resulting in more distance and ball speed. The Srixon z585 gives you the nice feel of the z565 while also adding outstanding distance and control.

That’s definitely a level above the 565, especially if you’re focused on getting as much distance as you can from your next iron.

As you can see, the difference between the two might be worth an upgrade. Especially considering that Srixon has tackled major improvements in the Z585 that will affect the performance.

You can expect more forgiveness in the newer model and better flex.

The price point for Srixon irons, including the z565 and z585, is on the high side. Although they are highly forgiving, you should be ready to part with a good sum if you’re getting any of them.

They are also very consistent and come with a nice feel to them. So, if you’re an average golfer looking to get better and improved shots, you can try them out…yes, if you can afford them.